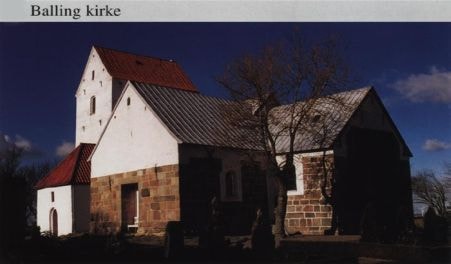 The church is built of ashlar and consists of a Romanesque chancel and nave with three extensions. In the Late Middle Ages a tower was added but only the lower part has been preserved and the tower was rebuilt in 1945 by the Danish architect Einar Packness. According to local folktradition it was a fight between two trolls that resulted in the destruction of the church tower: "Once upon a time there was a troll in the town of Balling and another one in the town of Rødding. The two trolls were always quarreling. One day they got into a fight and the troll from Rødding picked up a rock and threw it at the church tower in Balling - it destroyed the tower. Subsequently, the troll from Balling threw a rock at the church in Rødding, but it never went that far and landed in the meadow at Holmgård Castle - in Vester Balling - and there it lies still showing the 5 marks from the troll's fingers."
For whatever reason, Balling church lost its late Gothic tower and has been without tower up till 1945. In the late 1920's a collection in the community raised enough money to pay for the building of a new tower which was finished in 1945.