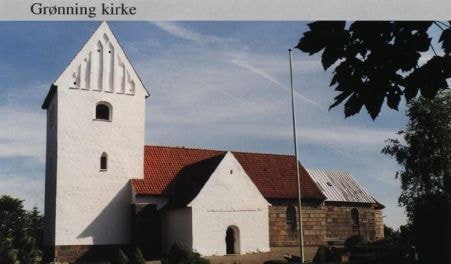 A Romanesque ashlar church with apse, chancel and nave. In the late Gotihc period, the tower and the porch were added. The altar is quite unusual - a recess in the partition toward the apse, in which is depicted a triangle with Jahves name in Hebrew placed inside a glowing halo above a burning urn. An arrangement which probably dates back to the end of the 18th century.
The baptismal font is composed of three parts, the upper and lower part is made of granite, while the part in the middle is made of sandstone with four projecting heads and three small figures. The baptismal bowl is made in the South of Germany in approximately 1575.
The church does not have a altarpiece.