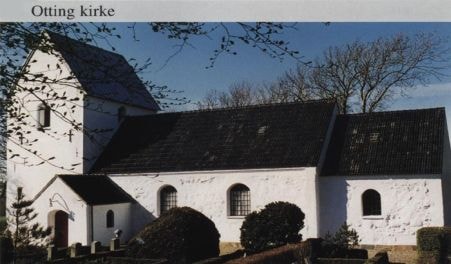 The church is a whitewashed, fieldstone church, which rests on a chamfered ashlar foundation. Chancel and nave are Romanesque. The church was renovated and coloured in warm colours in 1998-1999.
The altarpiece is from the beginning of the 16th century. .
At the entrance of the church is a monument for the Southern Jutland's reunion with Denmark in 1920. The big heavy stone was found at the beach in Krejbjerg, and 15 men from the parish tried several times to get the stone home. It was however a very big task for them, and they had to get some help from Oddense. It took 25 men three days to move the stone on a carriage drawn by 14 horses. Many people came to see how they moved the stone, and 60 men was selected to help push the carriage when it was too much for the horses.