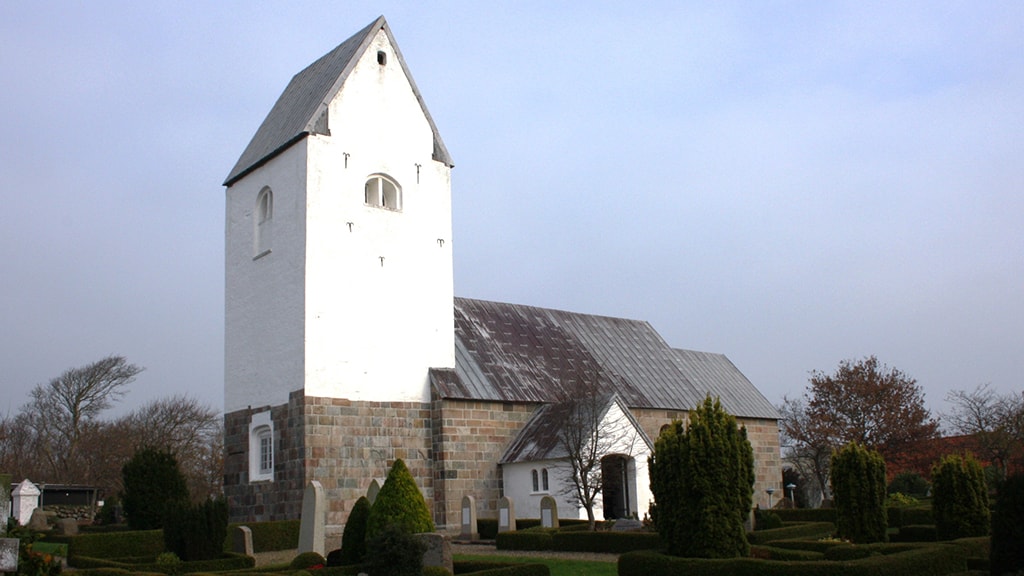 In Søndbjerg the church stands in the village with its houses and farms just as it did when it was built 800 years ago. This is what a Romanesque church looks like. Here is nave, chandler, apse, and Søndbjerg church has even had a tower from the beginning. This is proved by the inner tower arch. This may have been meant to emphasize the importance of the place. Søndbjerg was originally #sønder birk" = the southern judicial district, which was the Thingstead, where the court sat.

The footing stone under the south west corner of the tower is a runic stone whose inscription says: "Jacob caused, Skjalm did, where the altar is, there the eye is". Perhaps the stone was originally under the Communion table. Fairly early a new tower was built, maybe after a fire.

Over the south door of the church is a semicircular lintel, a so-called tympanum. A cross has been carved in the stone. Above the arms of the cross two birds are trying to come to the cross. Below the arms two lions are running away from the cross. Furious that they are unable to catch the birds, they have to content themselves with biting their own tails. The symbolism is clear: The birds are the souls of human beings, and the lion is Satan, who "walks about like a roaring lion and seeks whom he can swallow".

On the north wall is a well preserved crucifix from the second half of the 1300s. Also the wooden cross with the symbols of the four evangelists and the inscription "Jesus of Nazareth, King of the Jews" are well preserved. The pictures of the apostles from a former organ loft are in the tower room.
The baptismal font, which seems to have become brittle in a fire, has a newer basin with Jesus being baptized by John the Baptist as a motif.

In the small chancel there are vaults with remains of frescoes from the time before the Reformation. But the present frescoes were painted after the Reformation. The angels have been ordered to find every musical instrument in Heaven in order to rejoice together with the congregation at Søndbjerg church over "the new day of the Gospel". The altar piece from about 1600 has scenes of the Passion, and in the top section the Resurrection.

In the tower the bell hangs in a big belfry light to the north so its sound can be heard as far away as in Tambohuse in the north eastern corner of the parish. An old legend tells that a son from Helleris, one farm, seduced the daughter from Østergård, another farm. They ran away together. Chased by the girl's relatives the couple sought shelter in Søndbjerg church. As the Østergård-people could not get in, they set the church on fire. After helping the girl to escape through a window the Helleris son died in the flames. On her way from there the girl gave birth to a son in Kvinddal, a valley. As an adult he revenged his father's death.